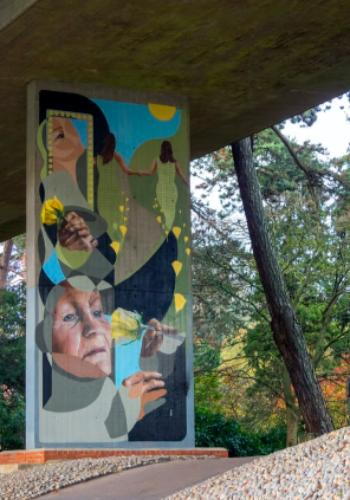 (part 2) The researchers also used role play interventions to help clients tap into thoughts and voices. Most compelling was the intervention "Taking the Mind for a Walk." In this intervention, the therapist plays the role of the client's mind while out for a walk. The therapist would walk a few paces behind the client making a running commentary about the sights and sounds they encounter along the way, but also making recommendations and describing, or predicting. The idea focused on replicating the stream of consciousness. The therapist might say "turn left" "shout" etc. The main objective was to help the client to have awareness of what the mind is saying without attempting to communicate with it or follow what the mind says. The objective is also to allow the client to hear voices but not respond even in light of being distressed by them and to let them go. I found this moving as it can be challenging to work with clients who experience auditory hallucinations and reading this article helped me consider using new interventions with my client who is assailed by hearing voices. One observation that I made with my client focused on how she stands up to her voices which led me to conclude as the researchers pointed out, that she may also stand up to the people in her life rather than easily submit. Another intervention that the researchers proposed was Socratic questioning. In this intervention, the client is taught to question the voice's criticisms and judgments. In this role play, the therapist plays the client and the client the voices. I found this compelling as the client can experience a demonstration of how Socratic questioning is done and how to formulate the questions such as "what evidence do you have that I am useless?" I found this type of role-play to be inspiring and instructive. Inspiring, as it is an innovative approach that is also a departure from more traditional approaches in which the client is disempowered, and instructive as the role-play also the therapist to demonstrate how the process is undertaken.

(part 3) The other intervention proposed by the researchers included a two-chair technique which is redolent to the Gestalt's method of the empty chair technique. The client c moves from one chair to the other. For example, in one chair the client role plays one aspect of his or herself such as re-experiencing a negative situation with the voices by repeating what the voices might be saying such as "I am weak", " I am not deserving of good in my life." In the second chair, the client embodies a more positive schema and demonstrates self- acceptance such as saying, " I am worthy and I have a lot to offer" and so forth. Often it can be difficult for the client to articulate positive aspects of themselves. Therefore, the therapist is required to help the client brainstorm positive schemas that can be applied. The client remains in the second chair as the therapist helps the client by activating a discussion about how both the negative and positive schemas are part of the same individual and it is also an opportunity for the therapist to demonstrate a genuine acceptance of both aspects of the client. Finally, the client begins to embrace what the researchers term the metacognitive symbolic self in which the client recognizes that the negative schemas are not part of the whole narrative. There is the awareness that within the client's life, there are also positive experiences and the voices do not hold pre-dominance over the client's life. I find it moving that this integration allows the client to gain a healthier, more balanced view of self.